“D.C. police were seeking a 30-year-old man last night on charges that he struck and killed a 5-vear-old boy last week while riding a motorbike through the courtyard of a Southeast Washington apartment complex . . . [he was] walking home with an adult caregiver from a nearby day-care center when the accident occurred . . .”

END_OF_DOCUMENT_TOKEN_TO_BE_REPLACED

Althea Yelverton, the five-year-old boy's mother, said she was angry that her son was walking through a “drug infested area.” She went to the church yesterday and asked church officials, “What the heck were they doing up there?”

END_OF_DOCUMENT_TOKEN_TO_BE_REPLACED

“The two boys and five other children were walking with an an adult caregiver from Stanton Elementary School to Young's Memorial Day Care Learning Center on Alabama Avenue, S.E., less than a half-mile away . . .” The caregiver was suspended from work.

END_OF_DOCUMENT_TOKEN_TO_BE_REPLACED

“Residents said that dirt bikes . . . are a problem in the apartment complex . . . riders often speed around . . . a motorcyclist had been riding in the courtyard since about noon yesterday . . . security workers apparently did nothing . . . ”

END_OF_DOCUMENT_TOKEN_TO_BE_REPLACED

Beale's attorney, Douglas Sparks, wanted to talk about the case’s impact on jail reforms, and its impact on Ms. Beale: “During 5 years of litigation following the savage murder of her son, Pearl Beale never stopped telling his story despite her own grief. With eloquence and dignity, she put a human face on the rampant violence at the jail. . . . The fundamental changes made to how the jail is run today would have been unthinkable before Givon’s death. The jail is safer, less crowded, better managed, and more humane because prison reform advocates cared and District leaders acted.”

END_OF_DOCUMENT_TOKEN_TO_BE_REPLACED

The Washington Lawyers' Committee for Civil Rights and Urban Affairs, along with co-counsel Douglas Sparks and Covington & Burling LLP “settled a wrongful death lawsuit against the District of Columbia on behalf of the family of a prisoner of the D.C. Jail. The settlment was the largest amount ever offered by the District in a wrongful death action involving a prisoner .”

END_OF_DOCUMENT_TOKEN_TO_BE_REPLACED

Jailhouse Justice. Washington Window, The Newspaper of the Episcopal Diocese in Washington, Vol. 74 No. 11, November 2005.

“There are no excuses," said Douglas R. Sparks, Beale's attorney. "It's a simple matter. There hasn't been one day since the law was signed that the jail has been in compliance. How can you expect anyone in the jail to have respect for the law when the jailers disregard it with impunity?”

END_OF_DOCUMENT_TOKEN_TO_BE_REPLACED

“Douglas R. Sparks, an attorney for the family of one of the inmates killed in December 2002, said Washington is “personally” named as a defendant in a $20 million lawsuit against the city. “It’s probably a good thing for the city,” Sparks said of Washington’s departure. “Pretrial detainees haven’t been convicted of anything. They’ve been forced to live in an inhumane jail, and the director is violating their civil rights.”

END_OF_DOCUMENT_TOKEN_TO_BE_REPLACED

Eating Disorder: When Guards at D.C. Jail Do Lunch, Inmates Do Whatever They Please. Washington City Paper. 4 June 2004.

“Attorney Douglas Sparks, a board member of the D.C. Prisoners' Legal Services Project, says: ‘It’s not a coincidence [that inmates are stabbed when guards leave the units].’ He represents the estate of Givon Pendleton, who was fatally stabbed while the third guard was [out of the cellblock]. The incident kicked off the bloodiest four-day span at the jail in memory.”

END_OF_DOCUMENT_TOKEN_TO_BE_REPLACED

“But Douglas R. Sparks, an attorney for the family of one of the inmates killed in December 2002, said Director Washington’s position on the report conflicts with the legislation that mandated the study. ‘The bill requires that the mayor now impose the number that the consultants arrived at as the maximum inmate population at the jail,’ Sparks said.”

END_OF_DOCUMENT_TOKEN_TO_BE_REPLACED

“I hope that The Post and others of integrity and good conscience will continue to spotlight these conditions so the public will know how these inmates live and die,” wrote Sparks.

END_OF_DOCUMENT_TOKEN_TO_BE_REPLACED

“Pendleton’s mother, Pearl Beale, is suing the District for millions. Through her lawyer, Douglas Sparks, a board member of the DC Prisoners’ Legal Services Project, Beale charges the city with maintaining poor jail security.

END_OF_DOCUMENT_TOKEN_TO_BE_REPLACED

“Doug Sparks, an attorney for the family of an inmate who was stabbed to death at the jail last December, said the weapon in that case [may have been] smuggled by a corrections officer.”

END_OF_DOCUMENT_TOKEN_TO_BE_REPLACED

“One year later, tears still flow for Givon Pendleton’s mother. Her lawyer, Douglas Sparks, describes the conditions at DC Jail as a disgrace.”

“One year ago, a folding knife was smuggled into the jail and used to stab Givon Pendleton. Sparks says that the DC Government has yet to explain how the knife entered the jail, but that he intends to get some answers through the wrongful death lawsuit he filed less than two weeks ago.”

“Doug Sparks is a DC lawyer suing the city on behalf of the family of Givon Pendleton, a 24-year-old inmate who was stabbed to death . . . last December . . . Sparks says, he [is] not surprised by Saturday’s shooting.”

END_OF_DOCUMENT_TOKEN_TO_BE_REPLACED

“Six months after the Court ordered population cap was lifted, Givon Pendleton was stabbed to death. Attorney Douglas Sparks represents his mother and is a big supporter of Council member Patterson’s bill to recap the jail population, but says the issue of violence and overcrowding has already been studied to death.”

A D.C. jail inmate awaiting trial in two earlier slayings has been charged with the fatal stabbing of another detainee, Givon Pendleton, during a dinner dispute over a carton of milk.

END_OF_DOCUMENT_TOKEN_TO_BE_REPLACED

One inmate was killed and a second was wounded in separate stabbings over the weekend at the D.C. jail, just days after another detainee was slain in a similar attack.

END_OF_DOCUMENT_TOKEN_TO_BE_REPLACED

Attorney Doug Sparks represents the family in a lawsuit. He says: “The real issue is how many more children are going to die before management complies with the law? How much longer are we going to blame the victims? Why didn't they warn parents that another child fell?”

END_OF_DOCUMENT_TOKEN_TO_BE_REPLACED

An employee of the apartment complex had removed a wire screen about a month ago. District law requires that outside windows be screened from March through November.

END_OF_DOCUMENT_TOKEN_TO_BE_REPLACED

Landlord had removed screens from family’s apartment windows during August. A District toddler climbed through the opening and fell six floors to his death.

Things Are Locking Up . Letter to the Editor (by Douglas Sparks). Washington City Paper. 2 May 2008.

“Although Jones' death occurred well before Devon Brown became the DOC Director, he did not pass the buck. Instead, Mr. Brown apologized to Jones' mother and made sure the entire correctional workforce was retrained, and assured Ms.' Durham that he would not tolerate neglect by DOC employees,” wrote Sparks. Read More

“Jennifer Durham settled her lawsuit last year for the death of her son at the D.C. Jail. A video of the incident showed that corrections officers failed to perform CPR or even the most basic life-saving measures on her son. The settlement for Jones' young daughter wasn't enough for Durhams' attorney, Douglas Sparks. He wanted Department of Corrections officials to meet directly with Durham. After they met with DOC Director Devon Brown, Durham said: “It made me feel like what [my son] went through . . . made a difference . . .” As a result of the settlement, the entire corrections workforce now is certified in everything from basic first aid to the operation of portable defibrillators.”

END_OF_DOCUMENT_TOKEN_TO_BE_REPLACED

“Institutional indifference allowed Thomas Jones to die on a cold gym floor surrounded by poorly trained correctional officers . . . So, is it a bad thing that the public has learned of conditions in the jail? Or will the city make it right? The answer should matter to all people of conscience and good will because, in the words of Jones’ mother, “the next video could be your son,” wrote Sparks.

END_OF_DOCUMENT_TOKEN_TO_BE_REPLACED

Man Down!: How a poorly trained staff at the D.C. Jail let an inmate die. Washington City Paper. 28 June 2007.

In depositions taken by Douglas Sparks, attorney for the ‘man down,’ an Officer gave his definition of CPR: “If you’re laid out there, well, what I can remember is you look at the person, see if they’re breathing or not. Shake them, talk to them”. . . Another officer did not know what a defibrillator was . . .“That’s the big bulb where you assist people to breathe . . . ” To which Sparks replied: “It’s actually an electrical shocking device for cardiac resuscitation.”

“First successful lawsuit in Washington metropolitan area seeking damages for police failure to protect domestic violence victim from murder by ex-boyfriend who had been the subject of a civil protection order. Settlement to pay over $800,000 to surviving children.”

END_OF_DOCUMENT_TOKEN_TO_BE_REPLACED

“It’s not easy to sue the police for failing to protect someone. But Sparks used a legal strategy never tried here before, hinging the case on special police duties involving domestic violence cases, and won a first of its kind settlement.”

END_OF_DOCUMENT_TOKEN_TO_BE_REPLACED

The body of Nicole McNeil, 19, was found with multiple stab wounds in an alley by her home. Earlier, McNeil's mother called police because Nicole's ex-boyfriend had tried to break into their apartment. "And they never came," McNeil said.

END_OF_DOCUMENT_TOKEN_TO_BE_REPLACED

James Moore turned himself in to police in connection with the stabbing death of 19-year-old Nicole McNeil, his former girlfriend who had tried to sever ties with Moore. He is accused of dragging her to a dark alley and stabbing her multiple times.

END_OF_DOCUMENT_TOKEN_TO_BE_REPLACED
Back to In the News › 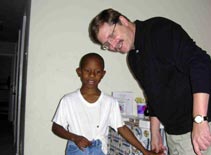 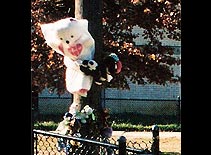 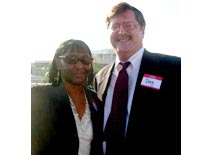 "Pearl Beale never stopped telling his story despite her own grief. With eloquence and dignity, she put a human face on the rampant violence at the jail." 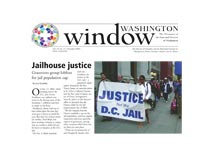 “How can you expect anyone in the jail to have respect for the law when the jailers disregard it with impunity?” 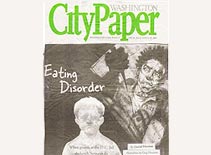 "It's not a coincidence that inmates are stabbed when guards leave the units."

"Maybe my son got a little off course, but he didn't deserve to die waiting for his trial." 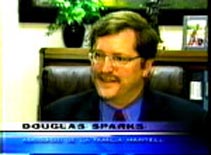 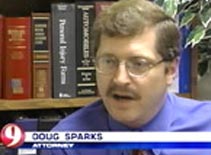 “The real issue is how many more children are going to die before management complies with the law.” 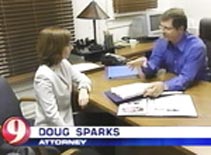 “How much longer are we going to blame the victims? Why didn't management warn parents that another child fell?”

"Every time I walk down the street, I look up to see if apartment windows have screens. I don't want more kids to fall down and die." 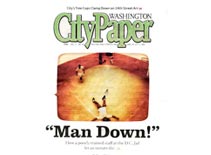 “Jones . . . always talked about his family. He had a daughter, Jamie, and he wrote and called his family often, . . . about all the time he was missing with them . . . .count[ing] the days left before he could return home.” 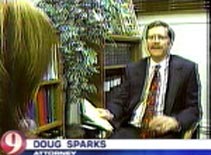 “It’s not easy to sue the police for failing to protect someone in a domestic violence case, but Sparks used a legal strategy never tried here before . . . and won a first of its kind settlement.”

"People count on police to respond quickly to emergency 911 calls. They don't know that in most cases, they can't sue the police for failing to protect them."
Client Reviews
★★★★★
"Mr. Sparks is by far the best lawyer I have ever met. Lawyers are easy to find, but finding one who is smart, honest, thorough, and truly cares about people is very difficult. Every member of my family has trusted him for over twenty years, and he has never let us down. Mr. Sparks is REAL and passionate about helping others." Sanaz
★★★★★
"Doug made me feel confident and welcome after my first lawyer gave up on my auto accident case. I was impressed by his intelligence, fast thinking, and attention to detail." Auto Accident Client
★★★★★
"A truly rare attorney who is out solely for YOUR best interest. In the courtroom, Doug dominated. He is extremely skilled, and an expert in what he does." Criminal Defense Client
View More
Submit a Law Firm Client Review